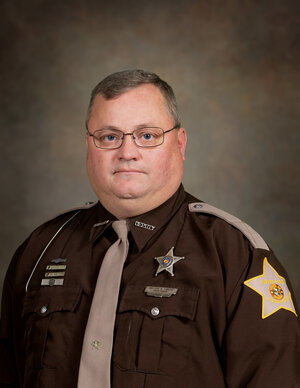 MSD of Steuben County welcomes new SRO Deputy Bill Lanoue, who will be working with Deputy Brad Scare for the rest of the school year.  He has been working for the Steuben County Sheriff’s Office for the last 26 years. He moved to Angola from Warsaw in 1999. He started as a confinement officer then transferred to the 911 center before he started full time as a Merit Deputy (Road Deputy) in 2005, during that time he also volunteered over a thousand hours a year as a First Class Reserve Deputy. During his tenure he was a Corporal and Sergeant for the road patrol, a hostage negotiator, and an evidence handler.

Deputy Lanoue considered going into teaching after high school but ended up in law enforcement, however that did not dampen his enthusiasm for working with youth whether that be helping them when they are in trouble or just interacting with them when he was out and about. He also spent the last 16 summers working as a counselor for the Indiana Law Enforcement Sheriffs Association Sheriff’s youth camp, where he takes 7th and 8th graders to a 3 night/ 4 day camp teaching kids about law enforcement and leadership.  The bond he makes with these students has been a highlight in his career. His time with the campers, his personal beliefs that all kids are good, just need direction and good role model is what has led to his enthusiasm for the SRO position.

Deputy Lanoue has also been an active member of the community.  He resides here with his wife of 19 years Ortha, and his daughter who is a freshman at AHS. He has been a coach for the Angola Kids League, and a volunteer with “Cops Cycling for Survivors” . MSD of Steuben County looks forward to Deputy Lanoue being a part of our team!